the chance to participate and excel!

Spartans Back to back

The Spartans earned their second Massachusetts Special Olympics Winter Games championship at Auburn High School. The team has 12 athletes ranging in age from 13 to 22 years old from Stow, Bolton, Lancaster, Shrewsbury, Sudbury, Framingham, Clinton, Harvard, and Northborough. All 11 of last year’s athletes returned, with Robert Wells from Stow added to this year’s roster.

The Spartans began practicing right after last year’s Championship win. The team practices once a week at Nashoba on Saturday mornings during the school year and twice a week over the summer. The road to the state championship begins with community games at local colleges and high schools. Prior to states, the Spartans paly in evaluation games at Regis College. The State Championship was played over March 8-9 at Auburn High School, one of the many locations hosting the games. Competing in the Brandon Bass Division (traditional seniors), the Spartans played four games against two other teams, LPS Lightning and Fitchburg ARC Celtics.

According to program coordinator and head coach Brendan Aylward. “The kids learned to be aggressive on defense, where to be on the floor, and different types of defense,” he explained. In addition to focusing on offense and defense fundamentals, Aylward ran his team through aggressive conditioning routines. “The kids run, do pushups, flip tires, jump rope, squat, and we even do some boxing at practice,” he said. “I challenge them to get stronger, faster, and more cohesive as a team at every practice.” 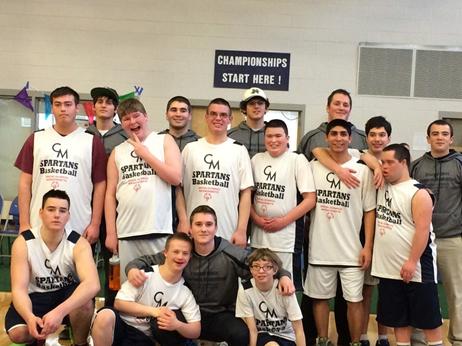 Brendon’s commitment to the kid’s and the program, and his desire to develop safe and effective training methods made him an outstanding candidate for a grant. Plans are under way for the Spartans 2015 season. The team begins practicing next week to prepare for the Second Annual “Play for Will” game between the Spartans and Nashoba staff. The event is scheduled for 7 PM, May 16th, 2014, at Nashoba Regional High School, 12 Green Rd. Bolton, MA The event is a fundraiser for Team Tepper’s walk in the Relay for Life and the Tecumseh Foundation, started in memory of Will Hurley.